Living in one of the few secular cities of the world where you can hear Azan, I especially want to tell a little about the mosques of our city.

Baku has about 30 mosques. We will cover some of the most familiar to us. 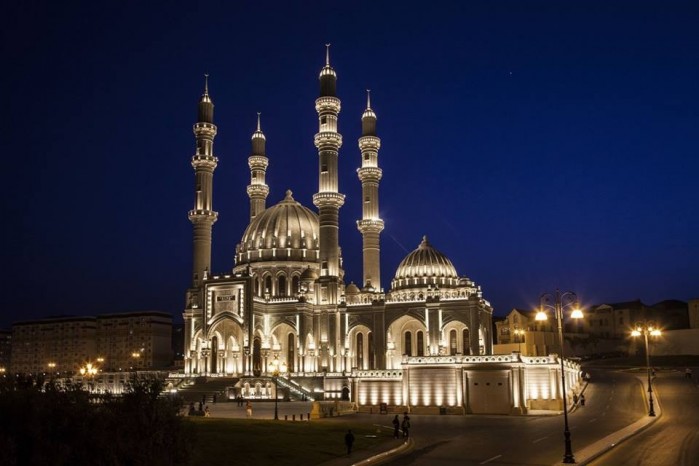 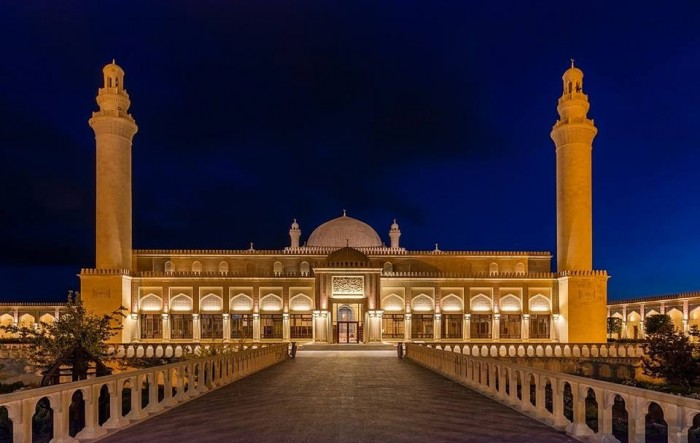 The order to build the Heydar Mosque was given by Heydar Aliyev’s son and successor, President of Azerbaijan Ilham Aliyev, in mid-2012. Construction work began in September 2012 and was completed in record time at the end of 2014. The total area of the mosque, together with the adjacent territory, is 12,000 m². The area of the mosque is 4200 m². The facade is faced with a special stone in the style of Shirvan-Absheron architecture. The height of each of the four minarets is 95 meters. Inside the mosque, special elements of decoration are used, and ayahs from the holy Quran are carved on the edges of the dome. The height of the main dome is 55 meters, the second dome is 35 meters

Having functioned only three years in connection with the October Revolution in 1917, the mosque was closed. Over the years, the mosque functioned as a cinema and barn, and only from 1943 to the present day - as a mosque.

The interior of the mosque has an area of 1400 m² and is decorated with patterns of the school of Azerbaijan painting and rare examples of oriental ornaments. Mihrab and dome made of marble. In the men's prayer hall there are 52 chandeliers, in the women's one there are 5. The women's chapel is made of pistachio wood, the metal stairs are replaced with reinforced concrete covered with wood. For worshipers there is a wardrobe.

The decorative elements of the mosque, the tops of the minarets and the inscriptions are made of gold. The dome, on which “La İlaha İllylah” is written 6 times, is made of Gyzylgaya stone. The height of the dome and a half meters. The windows and doors of the mosque are made of mahogany. Under the floor of a mosque deepened for 30 centimeters, a heating system is currently installed. On the floor there is a carpet “namazlyk” for 72 worshipers.

Bibi-Eybat Mosque (Azeri. Bibiheybət məscidi) is a Shiite mosque located on the shores of the Baku Bay, in the village of Shikhovo in Azerbaijan. The existing building was erected in 1998–1999 on the site of the mosque of the same name, built in the second half of the 13th century by the Shirvanshah Abu-l-Fath Farrukhzad, subsequently repeatedly completed (last time in 1911) and completely destroyed in 1936, during The “godless five-year plan”, when religion in the USSR was subjected to an attempt to completely eradicate.

The mosque was built over the tomb of the daughter of Musa al-Kazim, the seventh Shiite imam, who fled to Baku from the persecution of caliphs. Ukeyma-Khanum belonged to the family of Imam Ali and Fatima; an inscription carved on a stone tomb indicates its origin: “Ukeima Khanum, the descendant of the Prophet Muhammad, the granddaughter of the sixth imam Jafar al-Sadiq, daughter of the seventh imam Musa al-Qazim, is buried here , sister of the eighth Imam Ali ar-Reese "

Six construction stages of the complex development are determined. Each of them is marked by the addition of a new building erected by various architects from the 13th century to the beginning of the 20th century .

The oldest structures were an old cubic mosque, located in the southern part of the tomb, and a minaret adjacent to it from the west, built in 1305-1313, on the facade of which there was an inscription "The Work of Mahmud ibn Saad".

The Ajdarbek Mosque (also known as the Blue Mosque) is a historical mosque in Baku, Azerbaijan.

It was built from March 2, 1912 to December 3, 1913 according to the design of the architect Ziver-bek Akhmedbekov, construction was organized by Ajdar-bek Ashurbekov. The Kanni-Tepe quarter, where the mosque was built, was then built up with one-story private houses.

The architecture is simple; Next to it there is a large domed prayer room and a minaret. Ivan is from the east of the prayer room, and the mihrab is from the south and west. The dome is placed on a high drum to increase the volume. There is an extensive and delicate stone carving covering the walls. It was made by Salman Atayev, who also worked on other buildings built in Baku in the 1910s.